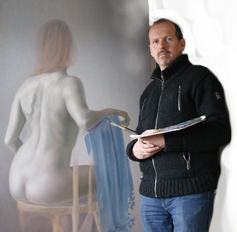 In recent years, the paintings of artist Peter van den Borne have increasingly found their way to galleries, private collections and businesses. This is no surprise because Peter’s work is characterised by carefully thought-out compositions that radiate peace and tranquillity. His works are painted in the modern realism style and stand out both in terms of imagination and the use of technique.

In his still lifes, Peter is inspired by objects with a past and/or by natural objects such as a simple blade of grass. Peter sees it as a challenge to convey on canvas the object’s soul, as it were. This fine painter does not just wish to imitate reality here: his overwhelming compulsion is to produce a vivid interpretation of the object and its soul.